Today’s review continues a story from last week, where the wife and I, while visiting Astoria, Oregon, happened across Pilot House Distillery, a small local producer of spirits and prepared mixed drinks. I reviewed the signature A-O ‘American’ Whisky and was pleasantly surprised at the aromatic, lively and smooth flavor. Today’s selection is Pilot House’s take on a single malt. The prospect of an American single malt was enough to prompt my interest, but then they add an additional hook: extreme maritime aging. Enter the A-O Come Hell or High Water (CHoHW) single malt whisky, distilled from a mash that is 100% malted two-row premium barley.

Many Scotch whiskies tout the maritime air of their product, infused during many years at dunnage warehouses, often at the water’s edge. Pilot House takes the concept to the next level. The casks, after 2 years’ aging, are sent out on fishing boats for the season. In the case of Batch 4, that was seven months on the F/V South Bay, a shrimp boat, tossed about on the ocean. I’ve never heard of anyone else doing that, so hats off to the folks at Pilot House for their spirit of innovation. Their concept includes not only the infusion of the salty air, but the fact that the casks are constantly jostled, presumably increasing the transfer of flavor from cask to spirit.

They’ve taken their salty concept and matched it with a fun and spicy moniker and a labeling to match: the the proud (and chaste) figure of a mermaid (with wings, no less) as the figurehead of a vessel, crossed tridents behind, and fanciful spray-topped waves tossed to each side. Click on the photos for a close-up.

It’s a nice change to make whisky fun but the rubber hits the road (er, screw hits the water?) with the uncorking. Wafting over the glass yields a rich, fruity nose with a definite backdrop of sea wrack and (true) cinnamon spice. The vanilla and orange I found in the standard A-O are there but not so forward and in a more complex spectrum of flavor.The nose has similarities to a sherried malt: drier elements balancing the fruit. Getting the nose into the old Glencairn reveals strawberry, malt and a slight mineral presence. It is a cleaner mineral aroma than the funky mineral you get from using water that’s run through layers of peat, as common in Scotland. CHoHW has a very well balanced nose, broader and with more notes than the regular A-O, which I’ve got as a comparison (I mean, what else are you going to compare CHoHW to?) The A-O standard is lively and bright, a brass quintet, where the sea-tossed dram adds the string section to form a chamber orchestra, if you will. And that nose is persistent. I have my cell phone over the top of the glass while I write and I can still smell it.

On to the tasting. There is the spice right off, developing into cinnamon toast and sweetened with orange creamsicle. More fruit comes on later, a subtle hint of cantaloupe. Toffee is there but more as a backdrop than the main theme as with the A-O. It’s a drier dram than the A-O, but more complex. The tannins are a shade less than in the standard, but with the less sweet palate, that’s fine, you don’t want a big whack of bitters. It is a smooth dram, not even a hint of harshness on the nose or on the palate.

It does clean up nicely. In the finish, the aroma notable for vanilla, subtle orange creamsicle, a bit of spice and tasty tannins for a clean feel. It’s not a powerful finish, it’s for savoring with some attention (it would not cut through a cigar like a Laphroaig, but that’s a different animal entirely). The CHoHW would be an excellent way to finish a fine meal, pairing with the dessert course. Not to say it is overly sweet, as are many corn-based whiskies, this spirit has good structure and balance. The only thing I could wish for is a version (or batch) with a higher ABV, say 46%.

Again, comparing to the A-O, the standard is livelier, not as broad in palate, and a quicker finish, with the citrus being the main theme, where the CHoHW brings a broader, richer flavor profile from nose to finish. All those months on the shrimp boat brought out more flavors from casks that are clearly well selected. Of course, with small production, the malt master can take the time to be selective with his wood. This is the kind of attention we expect from craft producers.

Nose: A rich and fruity nose: vanilla, sea wrack and (true) cinnamon for spice.  The fruit is citrus, melon and strawberry. Not cloying; drier elements balance the sweet.
Palate: Cinnamon spice and tasty tannins at first, maturing into cinnamon toast, followed by orange creamsicle and a touch of toffee. Smooth, but not overly sweet. Fruit comes on later, a subtle hint of cantaloupe, and throughout the tannins balance, do not overwhelm, never too bitter.
Finish: Spice, a tad more orange cream and vanilla on the finish; a good balance, the tannins last the longest and dry nicely.

Bottom Line: First off, as a gift for a whisky lover, the Come Hell or High Water whisky cannot be beat for innovation, unique theme, presentation and a kick-ass name. I guarantee the giftee will remember it. As for my usual dry economic take (since I buy all the whisky I review), I think it stands up. As it is a single malt, let’s compare it to other single malts. At $60, Pilot House is in line with other American single malts. For example, Oregon-based Westward has a single malt, which usually sells for $70, on sale for $64. On the Scotch side, you can get a decent single malt from a big producer for $40, but they aren’t as interesting as the A-O. In the $60 range for Scotch you’ll see treatments on the distillery standards like maturation in a different barrel, giving new shades of flavor, like the Glenmorangie Nectar D’or or Balvenie’s Doublewood. I did a quick comparo with the Doublewood, and yes, the 12 years Scotch spends maturing gives it an edge in depth and complexity. But is the A-O single malt as enjoyable? Hell yeah. And a bit more fun. Recommended. 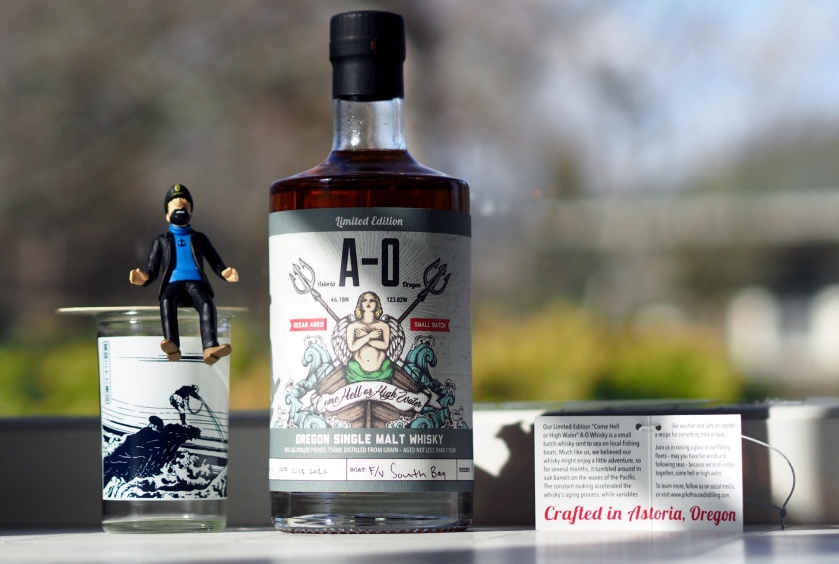